Kuwait Telecommunications Company – stc,a world-class digital leader providing innovative services and platforms to customers, enabling the digital transformation in Kuwait, announced the launch of its latest campaign, #We_are_one, in line with the return to school. The campaign will primarily focus on bullying prevention across a series of activities launched by stc, as well as engaging initiatives that uplift students in their return to school. The first initiative organized under the umbrella of the campaign was in collaboration with the Kuwait Association for the Care of Children in Hospital (KACCH), Bayt Abdullah Children’s Hospice (BACCH), Dabdoob, and the International Business Center. 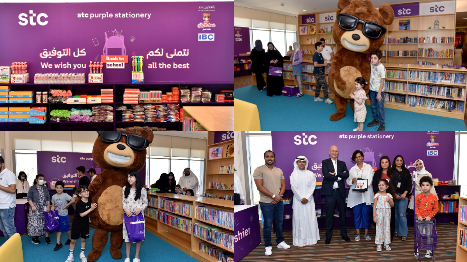 stc released a statement indicating that in line with the key pillars behind its extensive corporate social responsibility strategy, the Company launched the #We_are_one campaign to stand against bullying in all forms following the start of the new year. The campaign aims to promote spreading positivity by respecting peers and building positive relationships. In collaboration with entities from the Govt. and private sectors, stc will organize a series of initiatives under its new campaign to encourage students to stand up against bullying, while simultaneously focusing their energy on creating a positive impact in their schools and community.

As part of the # We are One campaign, stc will sponsor a young Kuwaiti talent in the art of writing stories, where a work will be developed specifically for stc, that simulates children to raise their awareness of the culture of acceptance. The story will be presented within a series of interactive events organized by stc to enhance its communication with local community.

The awareness campaign will also feature reports covering the bullying topic as well as working with a psychologist who will provide counseling tips and indicators related to preventing bullying and what the causes might be for such actions. The awareness messages will be posted on stc’s social media channels to inform the public on the negative impacts of bullying, anti-bullying strategies, as well as other valuable information.

stc purple stationary was the first initiative launched under the #We_are_one campaign, where stc partnered with e-commerce platform for toys and gifts, Dabdoob, as well as the local stationary store, IBC, to organize a special initiative for the children at BACCH and KACCH. The initiative aimed to instill a positive and uplifting atmosphere for the children coinciding with the return to school. Children got a chance to select the stationary items they needed for the new school year, while enjoying the entertainment options at the event such as face painting, an ice cream stand, and photobooth. The famous Dabdoob character distributed gift coupons and kept the children entertained throughout the initiative.

Danah AlJasem, General Manager of Corporate Communications at stc, said, “We are proud to launch our anti-bullying campaign to spread awareness of the impact of such behavior on the community. In line with the values that stc upholds, we believe that it is essential for our community to come together and stand up against any acts of bullying. By launching this campaign, our focus is to educate and spread awareness amongst the youth and adults on ways to prevent bullying, while showcasing the importance of building a positive and comforting atmosphere for our children.” She also added,"With the launch of many targeted initiatives, stc is trying as much as possible to involve Kuwaiti youth in all events and shed light on the achievements of Kuwaiti talents in various fields, as a commitment from stc to empowering youth within the framework of our comprehensive program for social responsibility.”

AlJasem Concluded, “We strongly value our long-standing and active relationship with KACCH and BACCH over the years and consider stc purple stationary to be another successful event concluded under the collaboration. Working side by side with Dabdoob and IBC has been a thrilling experience given the positive reactions witnessed by the children throughout this initiative. We look forward to more collaborations in the future that focus on empowering our community in various ways.”

To find out more about stc’s events, promotions, and sponsorships, follow stc’s official social media platforms, visit one of stc’s branches, download mystc mobile application, visit www.stc.com.kw or contact the customer service center by dialing 102 for around the clock assistance.